Clare Railway Centenary – The first section of the Riverton to Spalding railway was opened at Clare on July 4 by the Governor. A large official party, including the Premier and all the Ministers, went up by special train in the morning, reaching Clare shortly afternoon, and the ceremony was performed on arrival. Free train rides to Clare were provided for children on the route of the line and the children at Clare were also given a free ride.

The Riverton-Spalding railway was authorised under an Act of 1913. Contracts were let for the construction of the line between Riverton and Clare in three sections, and the work was carried out by Mr. George Baxter, except for a portion done departmentally by the Chief Engineer for Railways. The length of the line opened last week was 28 miles 5 chains, and it cost £252,300. It is estimated that the total cost will amount to £286,300 when completed.

The children began the ceremony with “The Song of Australia” and “God bless our splendid men.” The Minister of Railways (Sir Richard Butler,) invited the Governor to open the line. Ribbons of blue and old gold were held across the rails by his Excellency and Mr W. B. G. Lewcock, a veteran identity of Clare, who is popularly spoken of as “the father of the railway,” the successful agitation for which he initiated some years ago. Cheers were given as a decorated engine, on the front of which the Royal Coat of Arms was emblazoned, steamed up 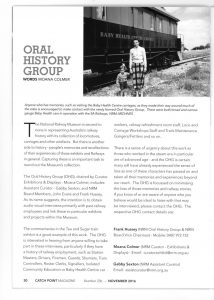 click here for explanation of the Mileposts and photos that are referred to in the Spring Newsletter.

Percival Hillam Quirke was the local MP described the local railcar as “the Ghost Train”. The railcar service was replaced by a road-bus in 1954, but if one report is to be believed the bus trip was as slow and rickety as the railcar. The bus contractor did a special deal with the Jamestown undertaker, and carried coffins on the roof of the bus.

Long touted as the site of Australia’s first political assassination the station achieved notoriety in 1921. But was Percy Brookfield really the target, or did he just happen to get in the way of a madman amok with a gun? State Records of SA has the police file on this crime. Koorman Tomayeff was the Russian gunman, who spent the rest of his days in the “Z” Ward at Parkside. He died in 1948 and his body went to the anatomy school.

A Short History of the Railway

The railway branch-line from Riverton to Clare was officially opened on 4 July 1918, and was fully completed to Spalding in 1922 …  click on Book Synopsis September 2016  to read John Wilson’s story of the Trains from Clare to Auburn. 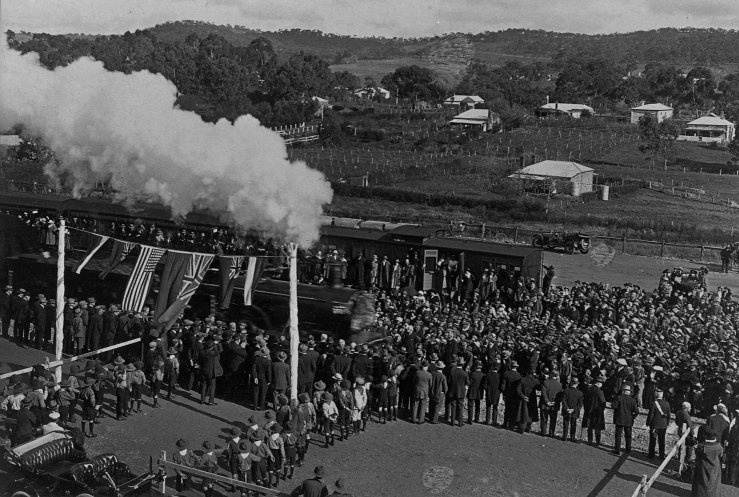 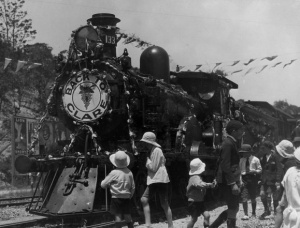 [Below]  The photo was passed on to me [John Wilson] by Roger Currie. It was taken in 1967.  Radio station 5AD and Smith’s Chips ran the train as a promotional.  I reckon that the train was photographed on its way to Clare and had just passed under the bridge at Penwortham.  The photographer, Roger Currie, would have been standing on Morrison Road.  The locomotive is an Rx class. 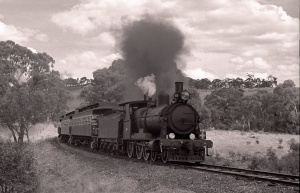 ‘They were not railway children to begin with,’ starts Edith Nesbit’s classic The Railway Children. Not in our case  – we seven McInerneys were always railway children, our father the railway stationmaster in the Clare Valley of South Australia for thirty-five years. Our house was two hundred metres from the station. We looked out the side window at the shining railway line cutting through the chalky soil and gumtree covered hills. Our front garden was long and terraced, old railway sleepers used as dividers, the levels planted with gladioli, agapanthus and fruit trees by the stationmaster before Dad. From the garden you could look across to the platform and the station building. Dad used to drive to work. It took him about twelve seconds. …. to read the ‘Railway Children’s’ story go to Monica’s website at  http://www.monicamcinerney.com/the-real-life-railway-children/