Sunday 7th July 2013 marked a special occasion for the Riesling Trail – “Drover & his Sheep” Sculpture was officially celebrated on New Road Clare by Artist and Sculptor Ty Manning and organised by Ann and Ryves Hawker. 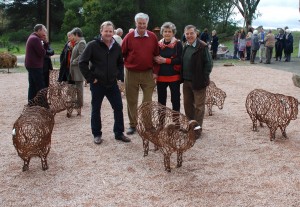 Mr Manning said each sheep took about 60 metres of mild steel to complete and he had spent many hours MIG-welding them together.

“The project started with six sheep and grew as they gained more sponsors, so I almost dreaded the phone calls from Ann Hawker to order another sheep,” he said.

Mr Manning, who also made the possum sculpture which is the fauna emblem of the Clare and Gilbert Valleys Council, has won prizes for his sculptures at Clare, Kapunda and Brighton art shows.

His Brighton Sculptures by the Sea winning sculpture, of a man sitting on a bench, was purchased by the local council and is installed on the esplanade at Semaphore Park.

As for the ram missing the most important part of his anatomy, Mr Manning said: “I might have to make a trip back here to remedy that for them”.

He will soon be returning to the Clare Valley anyway as he has been commissioned by the Auburn Community Development Committee to make a sculpture for the redevelopment of Centenary Park.

Drover and his Sheep Sponsors

Each part of the Mob of Sheep sculpture is tagged with the name of its sponsor.  They are: